Scroll for more
Details
All Projects /

Our customer bought an apartment in historical Podil to rent it out though Airbnb. It his travels through Europe, he enjoyed the quality of life in rented apartments, all well-build and designed with love.

He brought this culture home to give the guests of Kyiv a habitual feeling of a temporary home, not a poorly chosen hotel.

So that the host can invite his guests with a smile, not with a lecture ‘You gonna destroy our flat’. The flats get destroyed not by the guests, but by slapdash renovation. 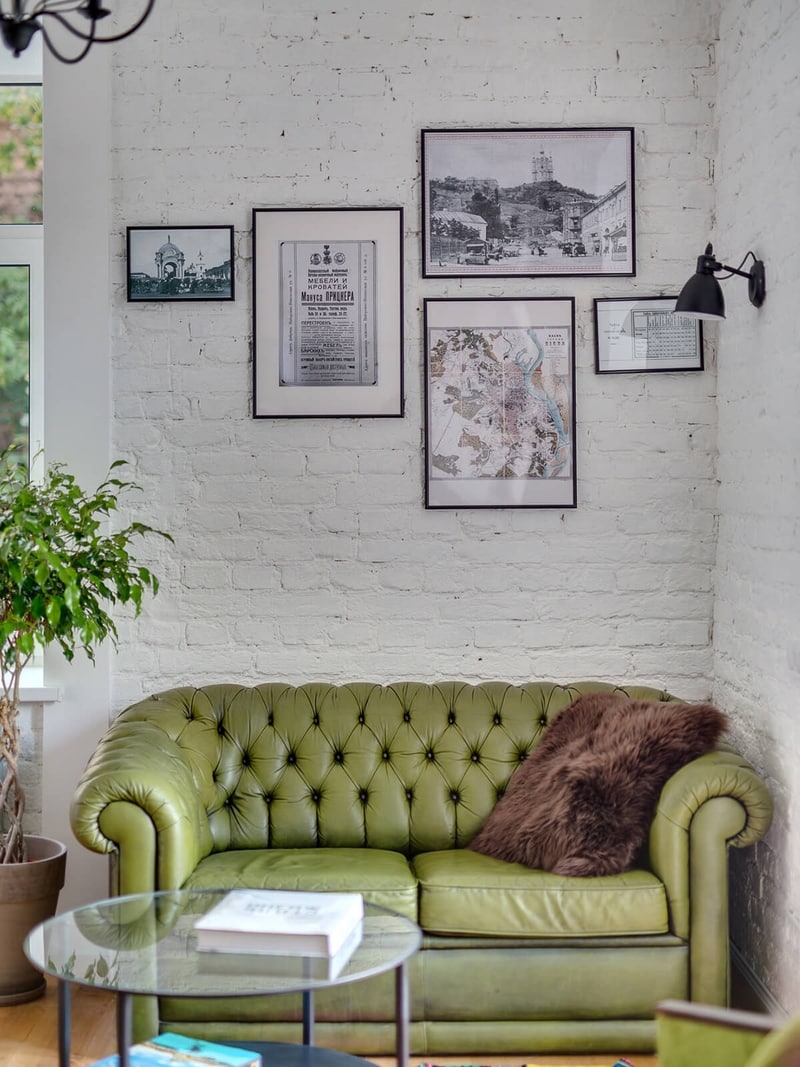 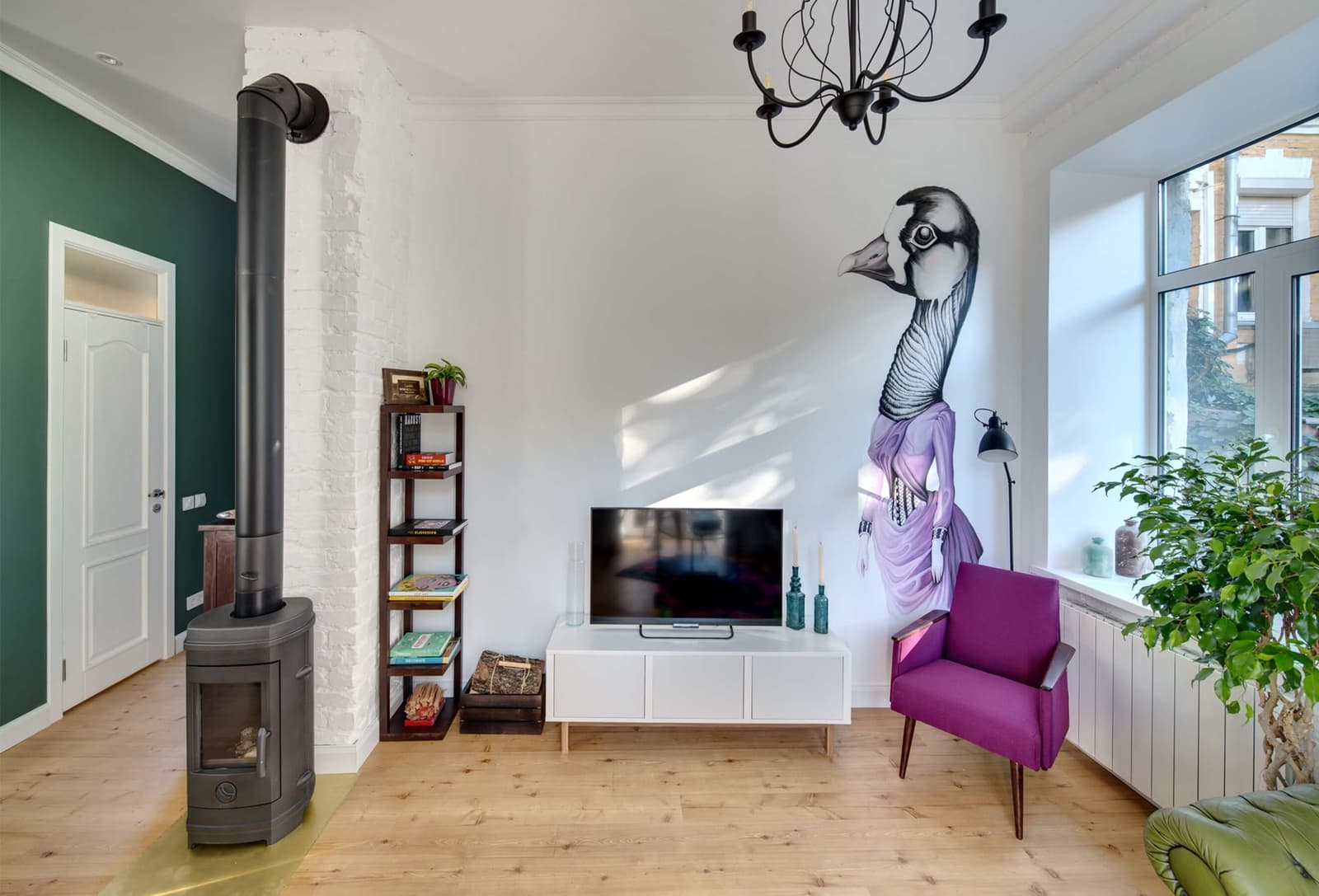 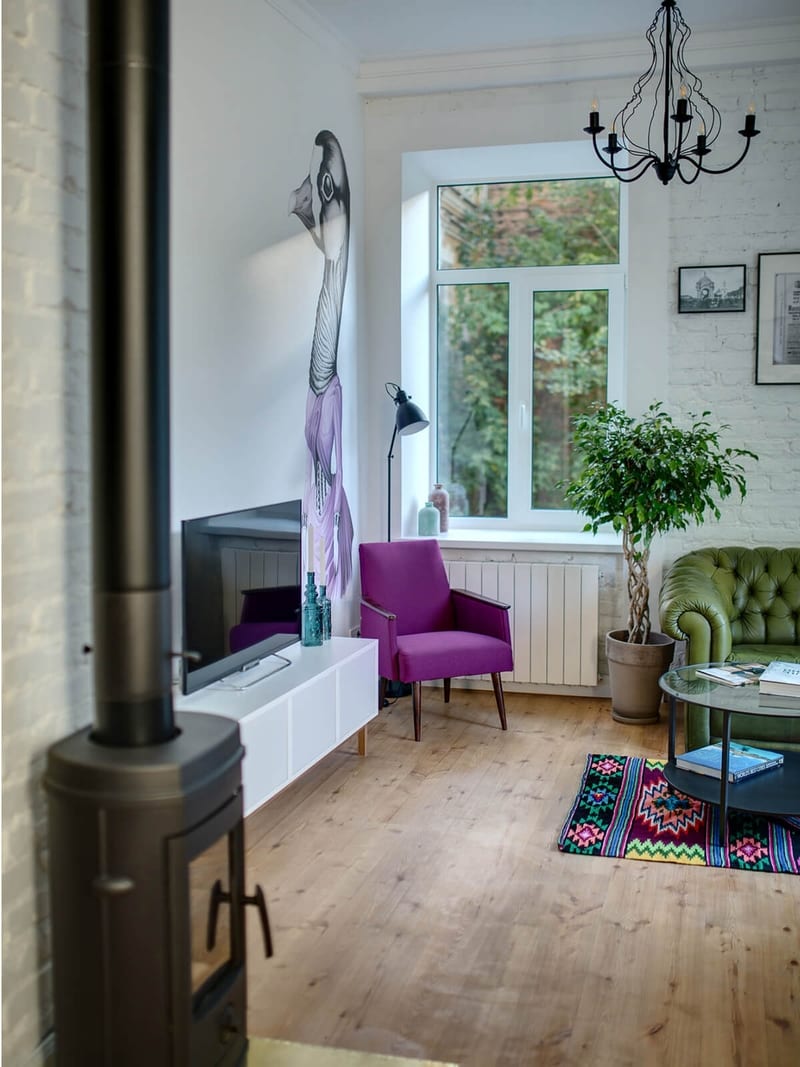 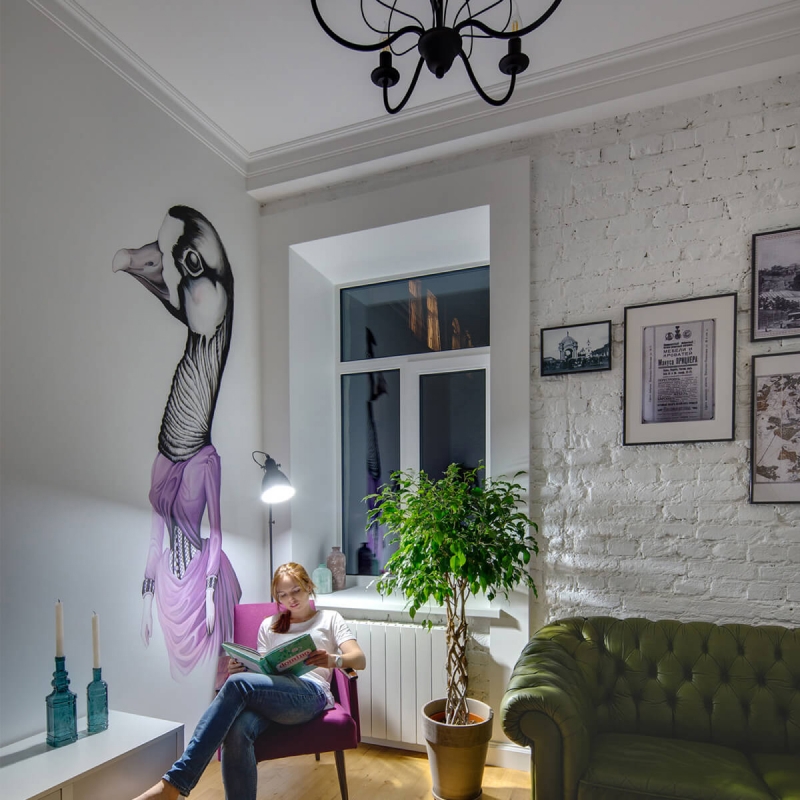 All we needed here was an interior attuned with local context, but modern and functional, in the spirit of XXI century. Hardly anyone believes there are actually only 42 m². With our good planning, the space kind of expanded. And, unless you badly need to keep your snow tires at home, we’ve got more than enough storage facilities (a wardrobe in the hallway and desk drawers underneath the entire bed in the bedroom).

There was a challenge: with 3.2 m high ceilings, the standard two-metre doors could look disproportionately, like a hatch for a Hobbit, but doors made to order were out of our modest budget. So we decided to build doors with transoms which, in addition, allowed more light. Practical tiles can be seen in the hallway, in the kitchen and bathroom, but for other rooms, designers decided on wooden planks from larch which age gracefully and can be easily restorated.

There is a pub called „The Goose“ next door, this inspired the painting in the living room by Oleg Dashevsky, the portrait of mama goose. A brass bell from Lviv flea market at the entrance is not just a doorbell, it reminds of a friendly neighbourhood of old Podil temples. An artificially weathered mirror in the bedroom was bought from Odessa antique dealers. A woolen folk carpet in the hall is handmade by Zakarpattia craftswomen. These objects bring local charm to this modern flat. Bright shades are considered dangerous for interiors. Instead, in residential spaces it is a color neutrality which is really dangerous. In this apartment, the neutral white furniture is mixed with colorful accents: muted greens and purples. ‘That’s not something I can live with’, people comment on the purple armchair. But in a rental apartment, we cannot afford being neutral. 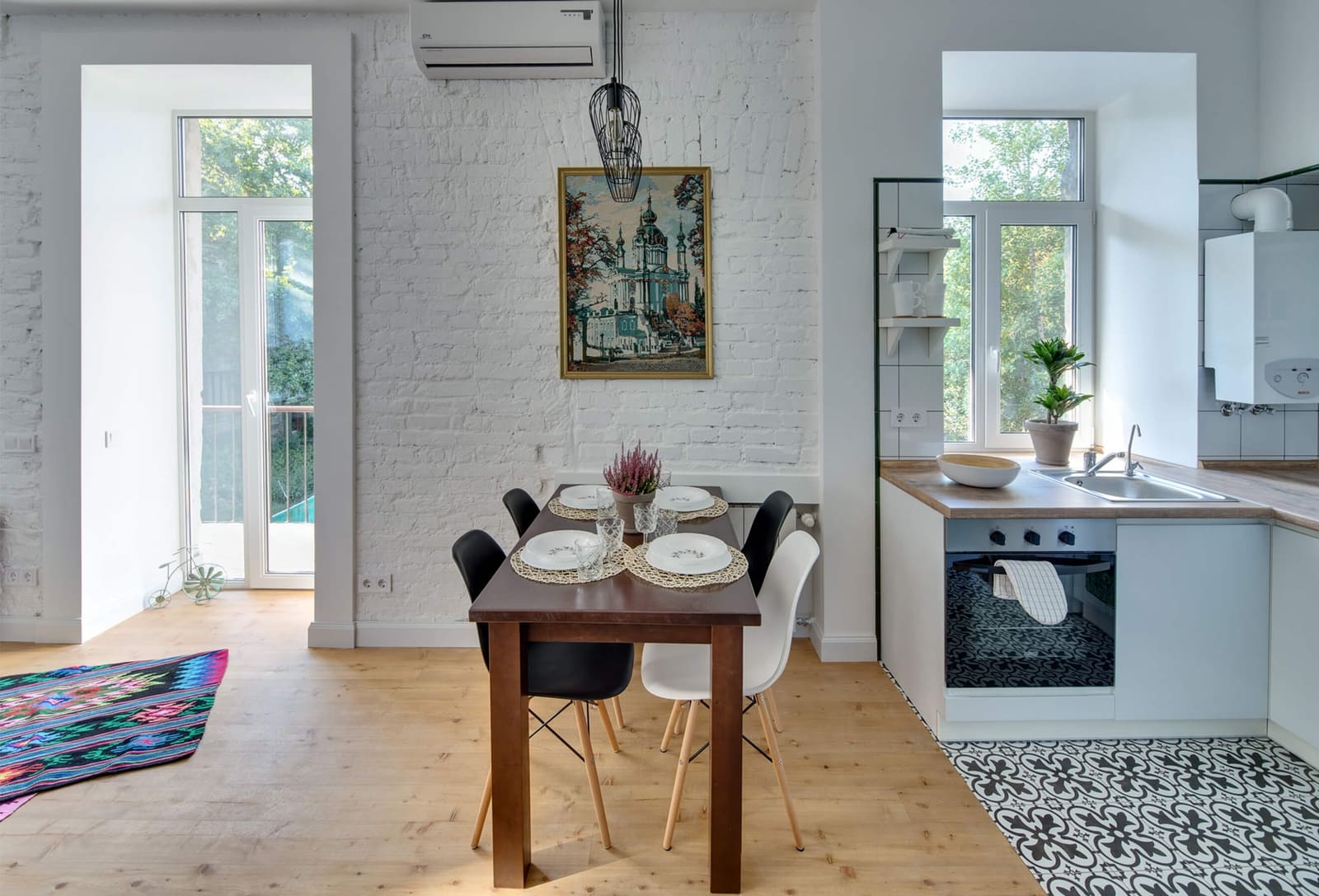 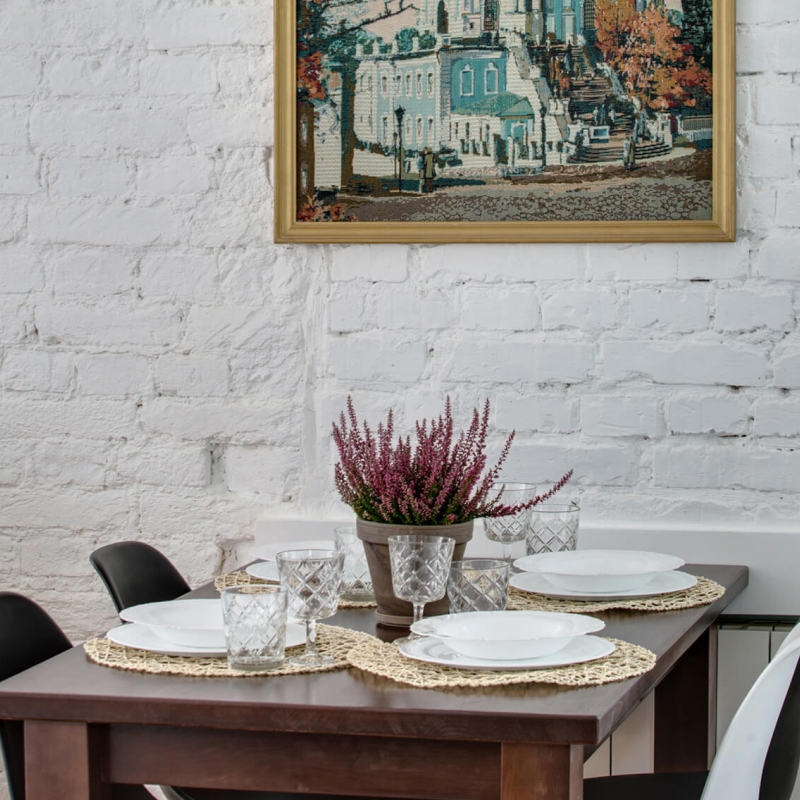 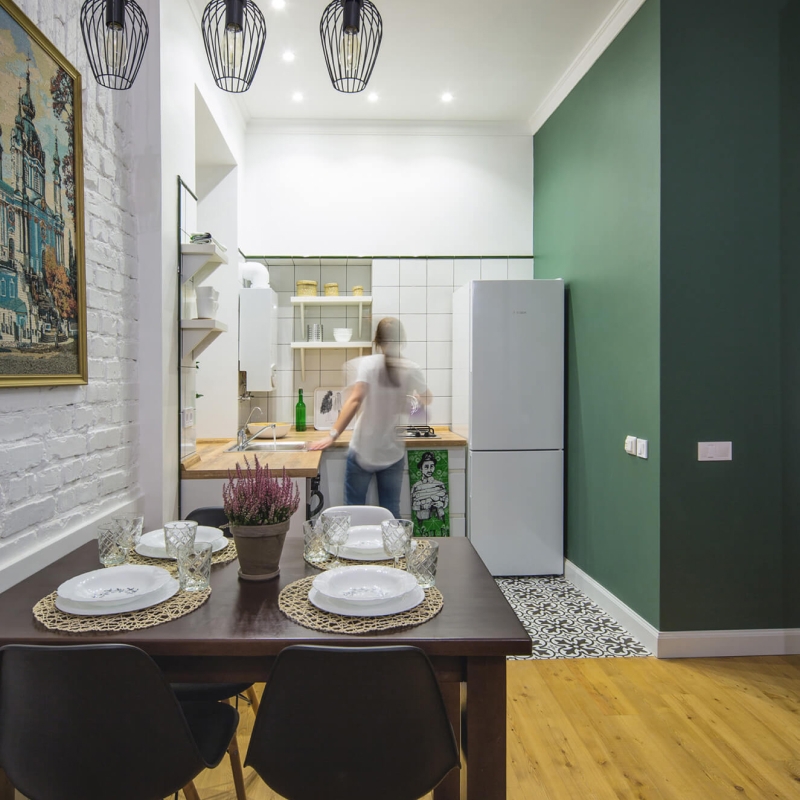 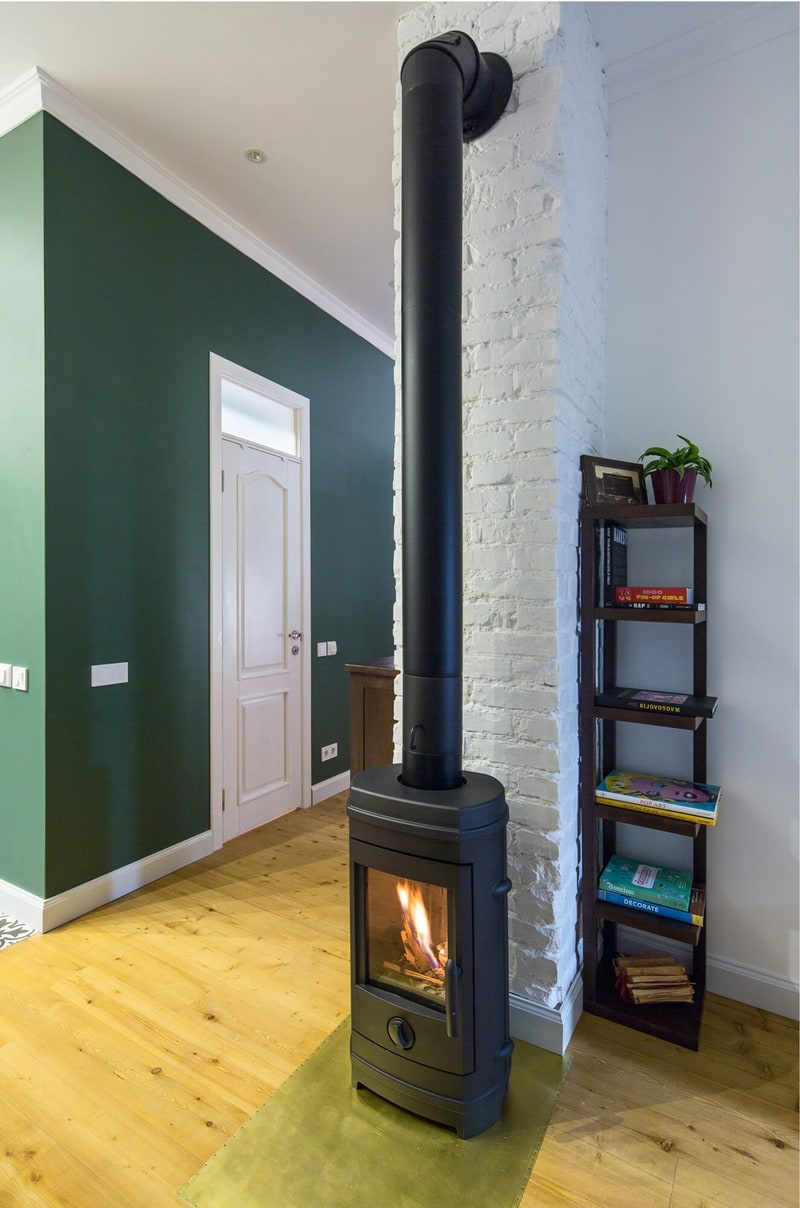 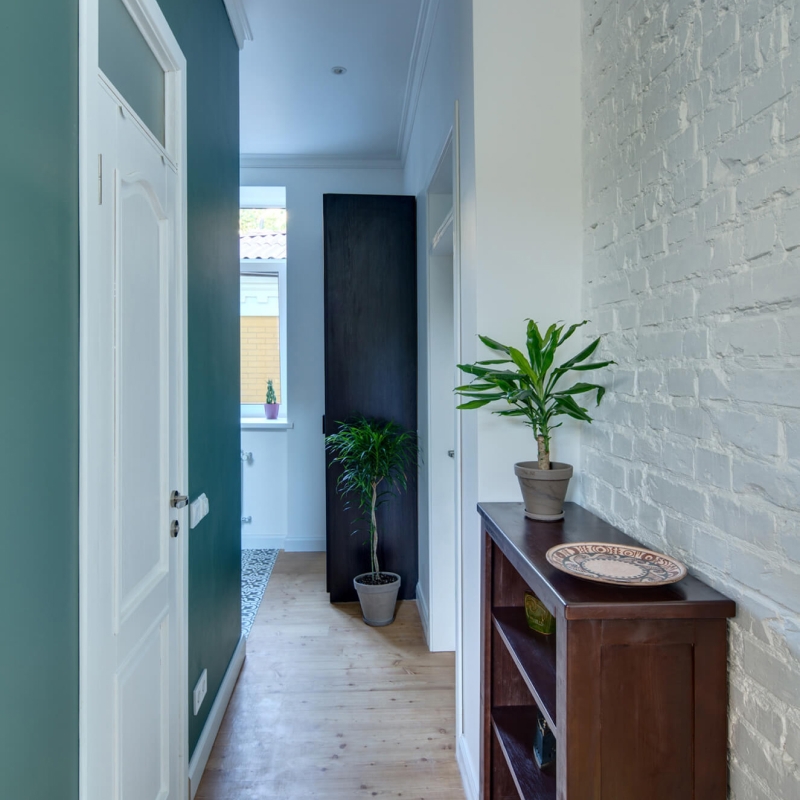 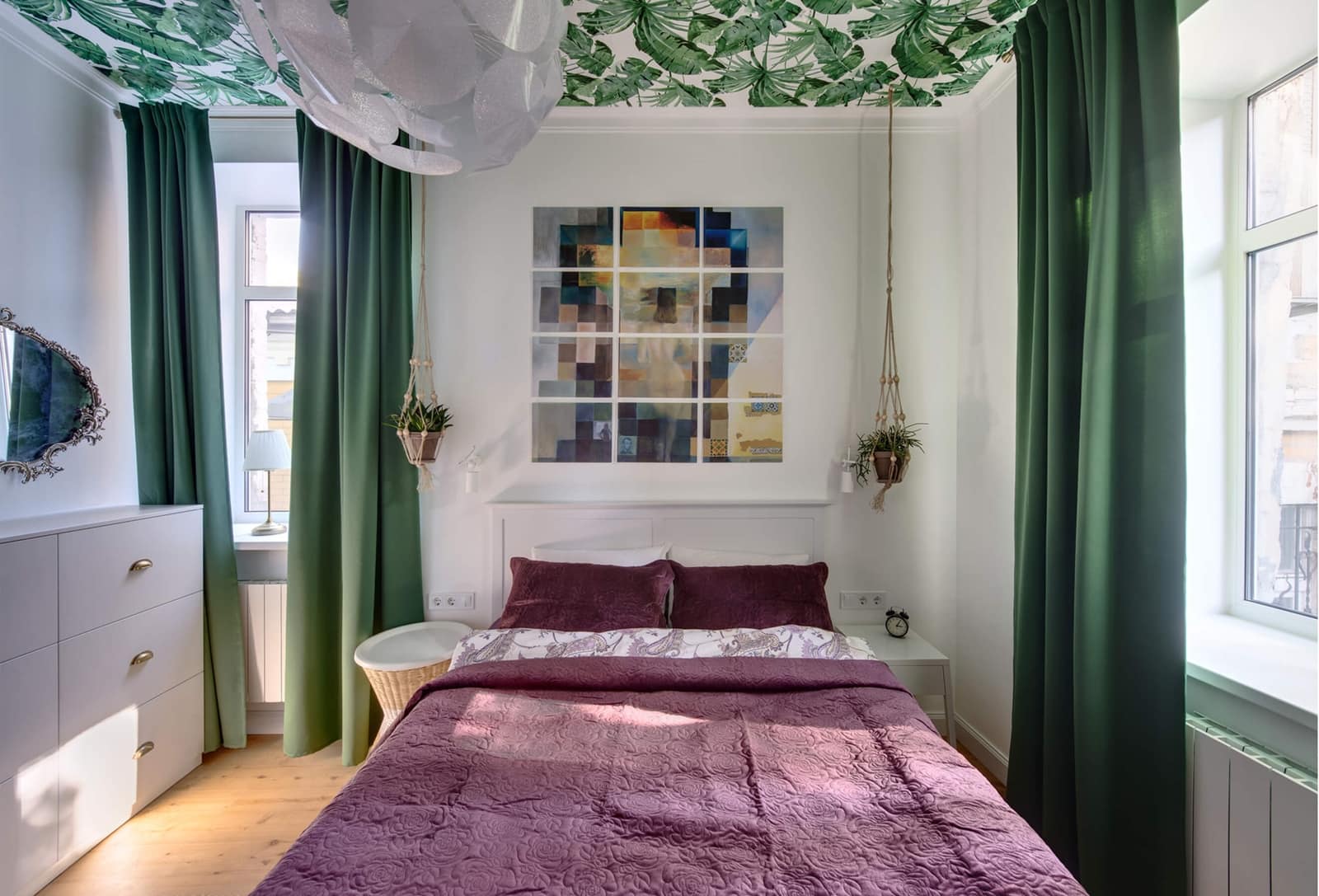 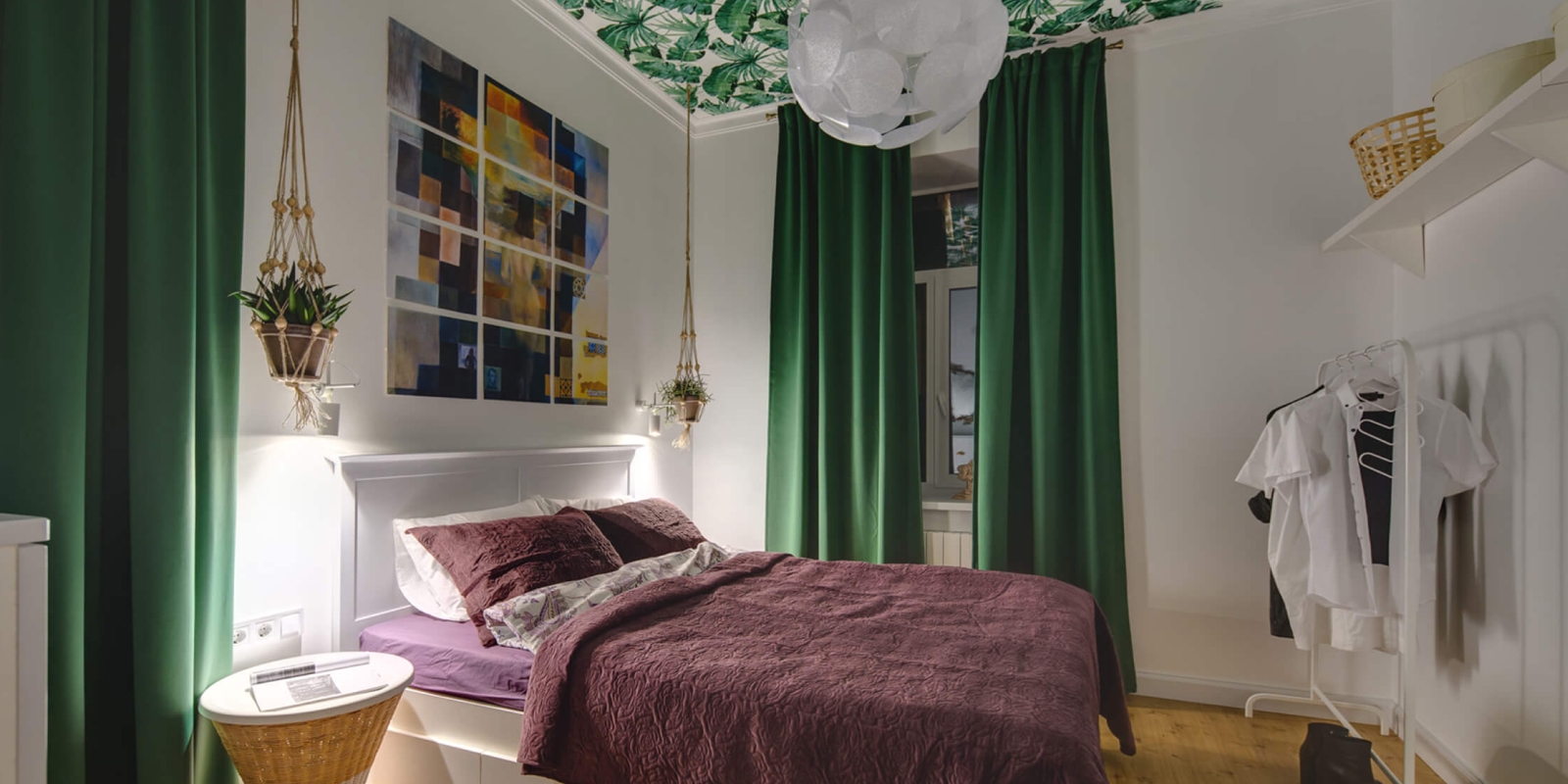 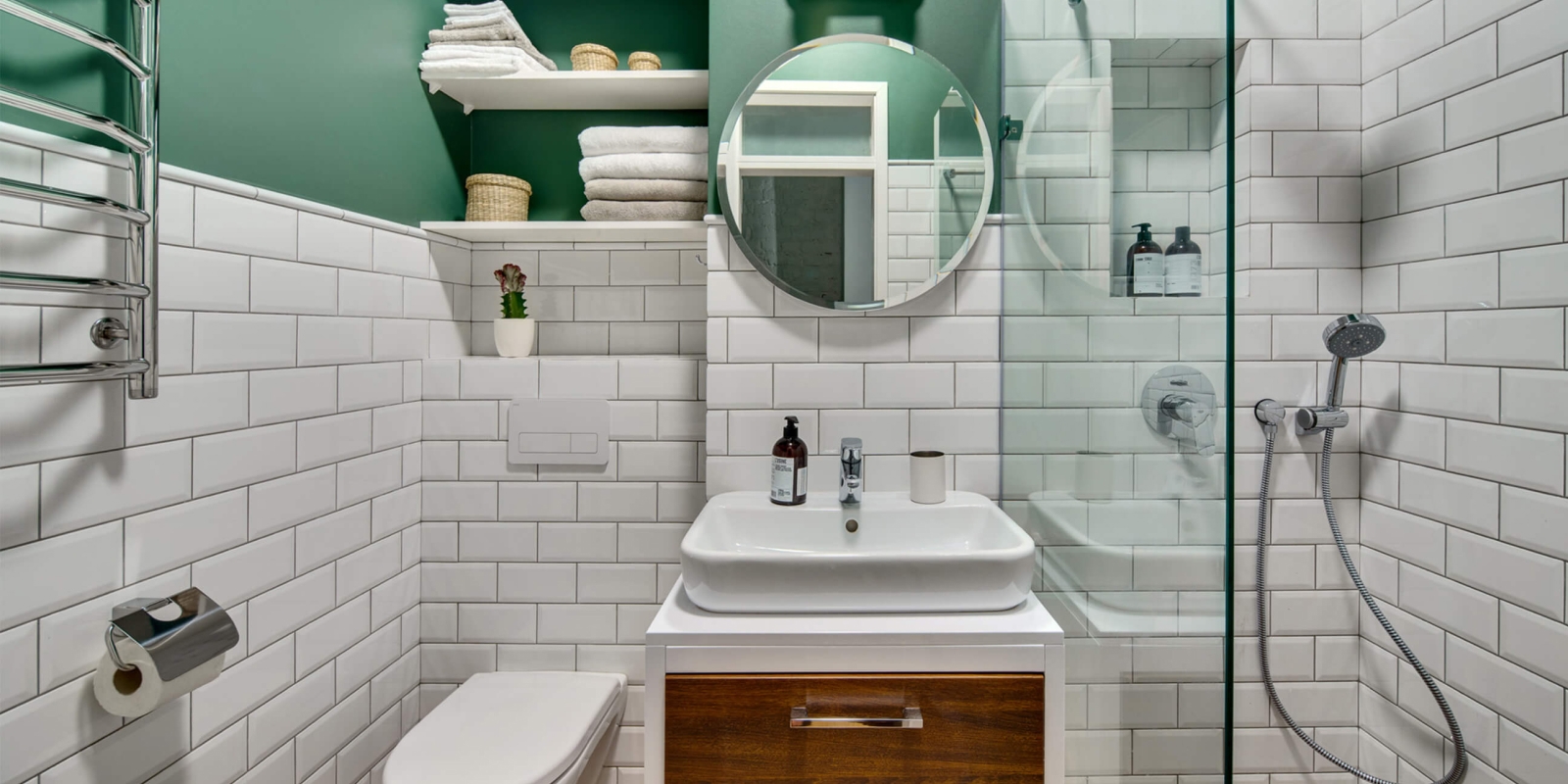 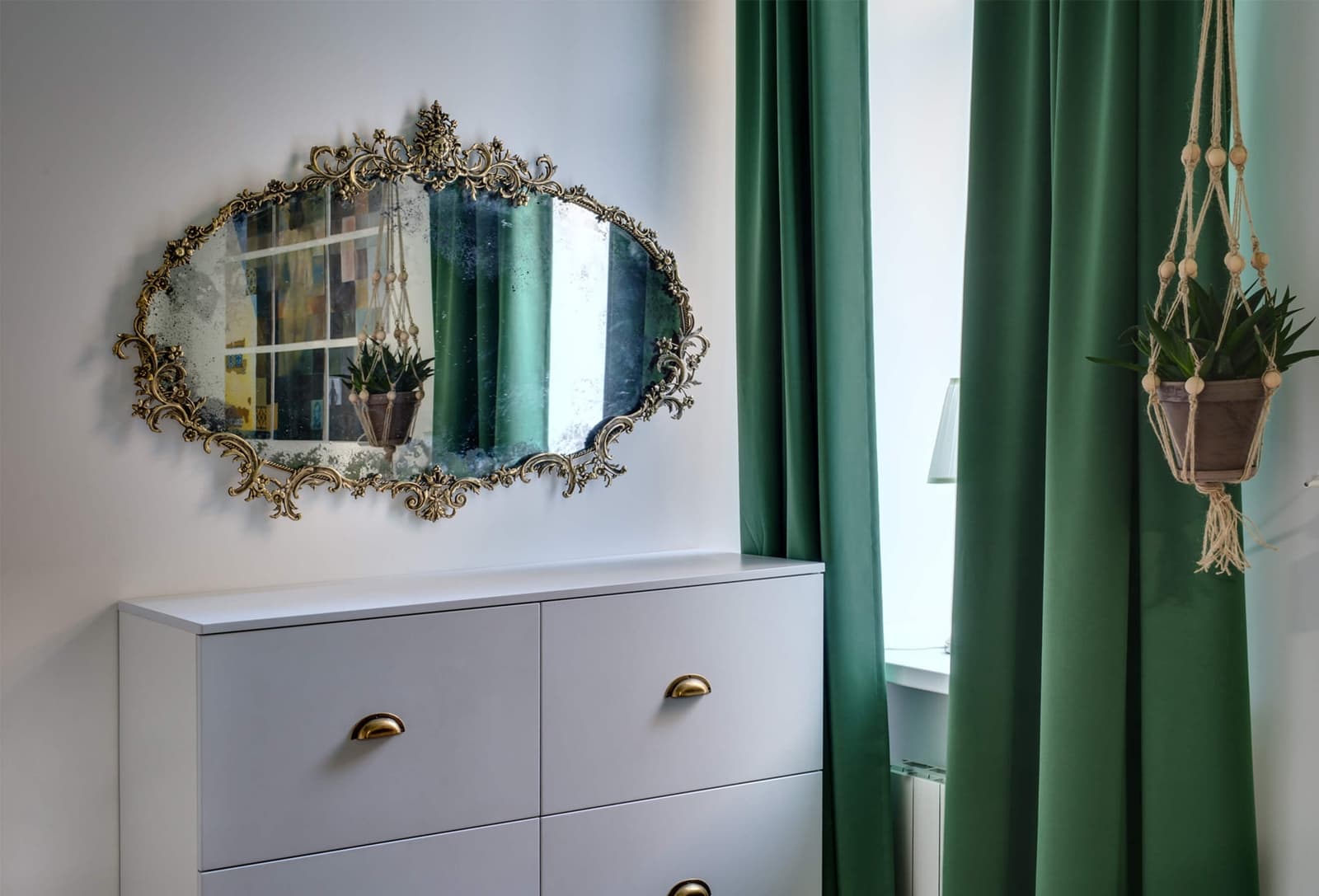 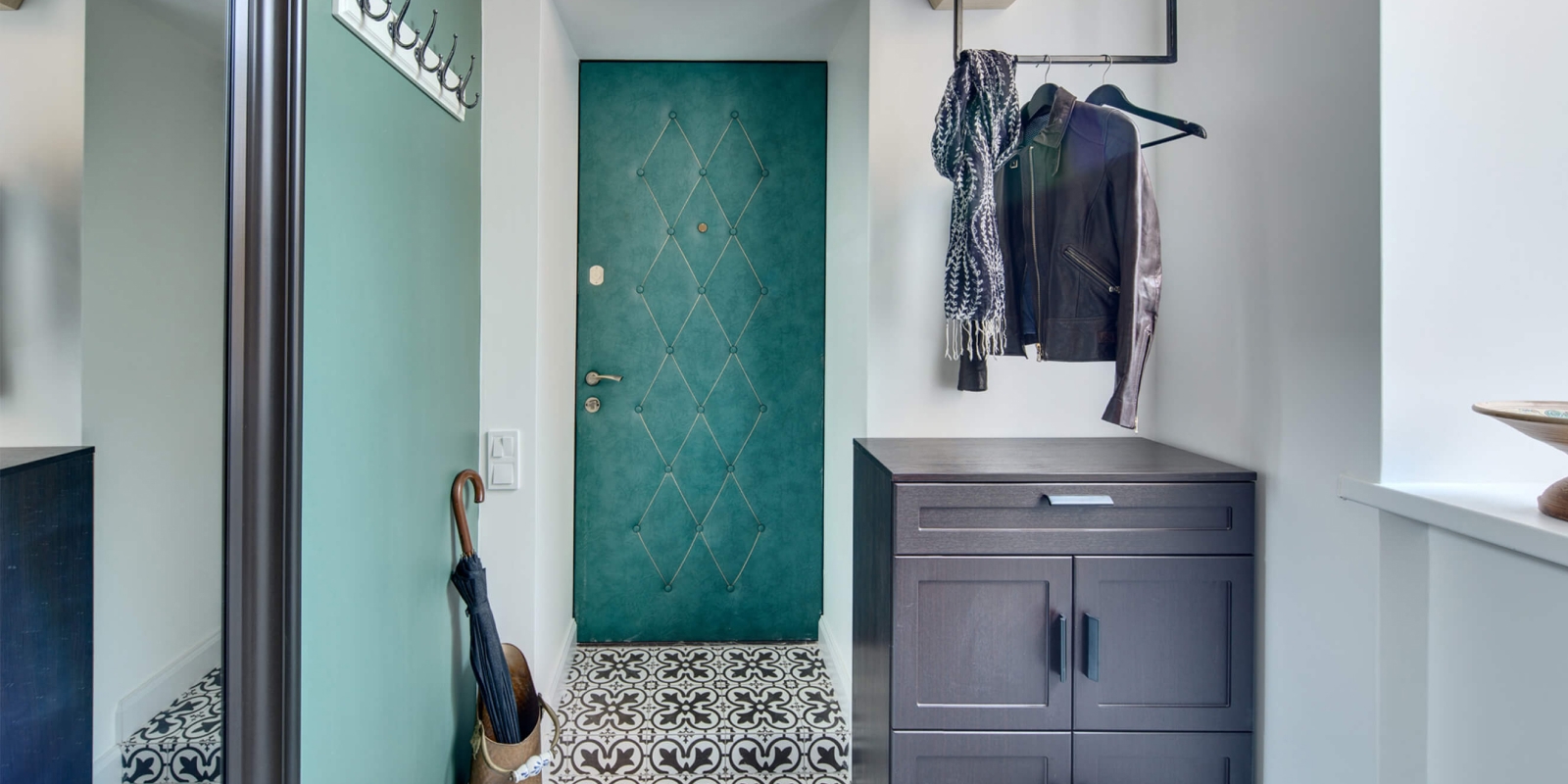 Share our philosophy:
Leave your request now
don't hold back, ask your question
Find out more

Thanks for your request!

We will contact you within a few hours.
Oops! An error has occurred. Try to check the data and submit your request again.